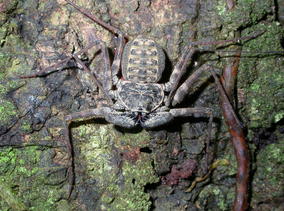 The Amblypygids are animals flattened dorso-ventrally, which by its general appearance resemble spiders. Its body is divided into two main sections. The former is called prosoma or cephalothorax, while the later is called opisthosoma or abdomen.
The carapace is dorsally covered by a plate-shaped structure, which is given the name of carapace which is a hard consistency. In this encounter, in the front and towards the center, a pair of simple eyes, which are usually placed in a small tubercle. Following backward and located toward the side edges, there are two triads of eyes, one on each side, so that in total of eight eyes in most species. The carapace may also have various irregularities, such as tubercles, or various types of bristles or setae.